The Welsh name Pen-coed means “end of the wood”, and refers to the site’s location at the southwestern extremity of the Wentwoodforest. It was the site of a Norman castle, the property of medieval clergyman Sir Richard de la More in 1270. The tower at the south-west corner of the extant ruins dates from the late 13th century. The manor of Llanmartin was owned by the Kemeys family around 1300, but it is not clear whether Pencoed was a separate manor at that time. 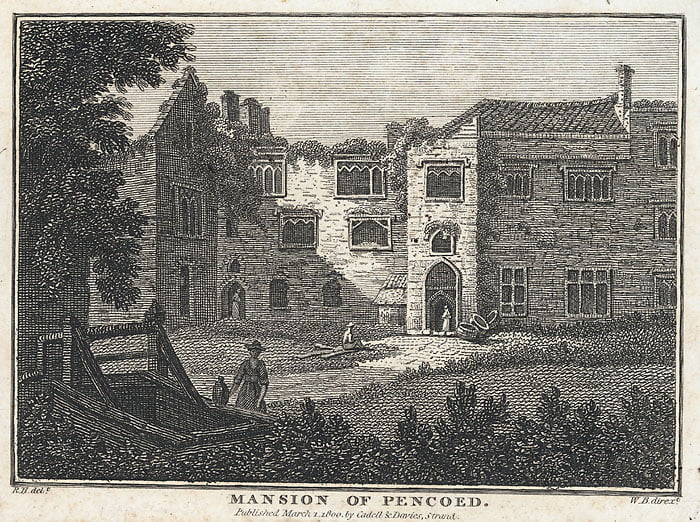 By about 1470, the estate was in the hands of the Morgan family of Tredegar. It seems to have been owned by Morgan ap Jenkin Philip, and then his son, Sir Thomas Morgan (c.1453–1510), who is thought likely to have fought at the battle of Bosworth in 1485 and who was probably the first of his family to settle at Pencoed. He was followed by his son Sir William Morgan (c.1480–1542), and in turn his son Sir Thomas Morgan (c.1513–1565). After the end of the Wars of the Roses, the more peaceful nature of society allowed such houses to be built. According to the architectural writer John Newman, it is likely that parts of the remaining building were built by the first Sir Thomas before 1510, and the main range and gatehouse by his grandson (also Sir Thomas) between 1542 and 1565. In about 1545, John Leland mentioned Pencoed as the home of Sir Thomas Morgan, and described it as “a fair maner place”.

Around 1584, the estate became the property of Sir Walter Montagu, the husband of Thomas Morgan’s grand-daughter Anne; Montagu was also responsible for founding almshouses at Chepstow. In 1701, Montagu’s descendants sold Pencoed to John Jeffreys, MP. His son in turn sold it in 1749 to Admiral Thomas Mathews of Llandaff, also an MP. In later years the property was owned successively by Sir Mark Wood, Sir Robert Salusbury, and Thomas Perry, but became increasingly dilapidated and ruined, and was let out to farmers.

It was sold in 1914 to David Alfred Thomas, later Lord Rhondda. Thomas intended to restore the house, and began work on the main central building, but it was incomplete at the time of his death in 1918. His widow then commissioned Chepstow architect Eric Francis to build a new house adjoining the ruins, in 1922; she sold it a few years later and it is now a farmhouse. In the mid-1950s, the ruins were used for filming an episode of the popular British TV series, The Adventures of Robin Hood. A bungalow was built nearby in the 1960s, but the castle remains themselves have become increasingly ruinous and derelict.

Plans to use the site as part of a golf and hotel complex were first mooted in 1989. In 1998, further proposals came forward to build a large theme park, billed as the largest in Europe, around the ruins of Pencoed. The promoters of the scheme, which would have been known as Legend Court, withdrew the proposal after it failed to receive planning permission in 2000. The site was put up for sale in 2001, and bought by businessman Peter Morgan. 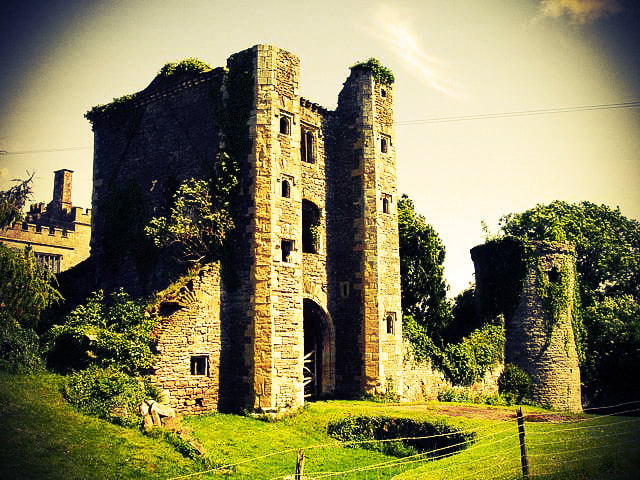 The tower is the earliest part of the building; it is built of Old Red Sandstone and is largely intact. The gatehouse is entirely of Tudor origin, and “on a much grander scale”. It is rectangular in plan, of three storeys, with square turrets. The main range is largely intact, rising to three storeys and constructed of ashlar stone, similar to that of Raglan Castle, built around the same time. It has a battlemented parapet. The great hall has a central three-storey porch, with a two storey range on the south side and a three-storey building on the north side. There is also a three-storey northern parlour wing, which originally housed kitchens, and the remains of a south wing.

The interior of the building is entirely ruined, apart from the rooms rebuilt for Lord Rhondda, and largely surveyed. Close to the house are the ruins of a 16th-century dovecote. There is also a continuous range of stone-built barns, probably of the 16th and 17th centuries.

Pencoed Castle was given Grade II* listed building status on 3 March 1952. The ruins are not open to the public